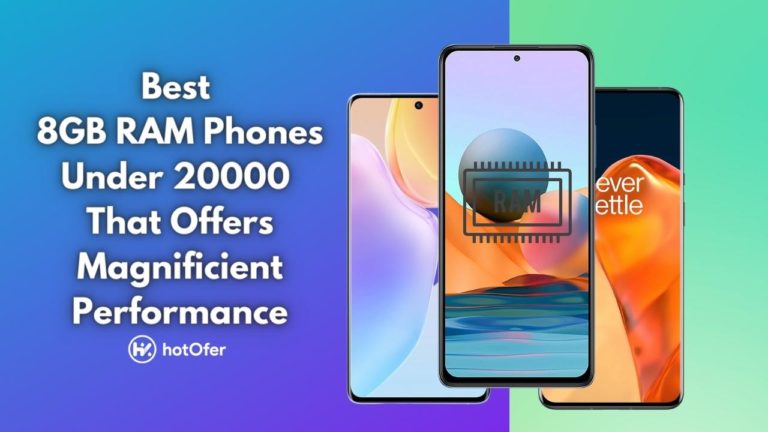 Hello Friends, if you are looking for a phone with 8GB Ram, then you are at the right place because here we will share some of the best 8GB ram phones under 20000 rupees that are capable of handle heavy tasks.

There is a variety of smartphones choices available in the market for the users with a range of 10,000 up to 1 lakh. But you don’t need to buy an expensive phone for high-end features. Nowadays, famous brands like Realme, Oppo, and Samsung come up with mid-range mobiles phones with the better build quality, high pixel cameras, attractive design, and long battery life.

Realme 8s 5G is the best 8GB RAM smartphone that is powered by an octa-core MediaTek Dimensity 810 processor which is capable of performing at a maximum speed of 2.4g Hz. Also, Realme has also installed Mali-G57 MC2 GPU for the graphical requirement.

The devices come with the 5000mAh li-on non-removal massive battery which is also suitable with a 33w dart charger, this battery provide full day battery backup and it can full charge in less than one hour.

The 64 megapixels camera install on the device provides the 80a field view and up to 20x zoom feature, the Realme also has provided the 16 megapixels camera on the front. This affordable smartphone is available in two different colors i.e. universe blue and universe purple. Overall, it is the best 8gb ram phone under 20000 rupees.

The Xiaomi Redmi Note 11T 5G is absolutely made for multitasking purposes which are installed with MediaTek Dimensity 810 processer. The company also install Mali-G57 MC2 GPU to enhance the graphic quality.

With an aspect ratio of 20:9 with large 6.6 inches IPS LCD screen and a resolution of 1080 x 2400 pixels, Xiaomi has also layered the display screen with corning gorilla glass v3 to reduce the accidental damages.

Another reason why this device is able to take its place in the list of top 8GB ram phones under 20000 is 50 megapixel rear and 8-megapixel front camera. The dual-camera setup has plenty of features like digital zoom, face detection, LED flash, etc.

With the Qualcomm Snapdragon, 720G processor accompanied by 6GB ram, this phone has all the features that you require. With function speeds of 2.3GHz and 1.8GHz to ensure the best performance.

It has 4500mAh battery backup with support 50 watt fast charging and comes in three different colors Infinite Black, Infinite blue, and Illuminating yellow. It is one of the best 8GB Ram phones under 20000 in India.

Regarding the quality of the phone camera, you would not be disappointed. It has a 108-megapixel rear camera and 8-megapixel front camera with HDR, Portrait mode features.

Infinix Note 11s is the best 8GB Ram Phones under 20000 in India that have amazing features.

Install with the MediaTek Helio G88 octa-core processor along with 4GB ram, this phone is getting an expandable internal storage space of up to 256 GB.

The device has 500mAh Li-Polymer non-removable battery with a 33W fast charging system.

The phone also provides a 50 megapixel primary camera and 2-megapixel camera with an AI lens accompanying an 8-megapixel front camera.

Pocox3 Pro runs on the Qualcomm Snapdragon 860 processor with 8GB LPDDR ram. The phone supports the android os, v11, and has 6.67 inches display with a weight of 215 g approximately.

The company has provided the 5160 mAh Lithium-ion Polymer battery that supports 33 Watt fast charging. this phone is the best gaming phone under 20000 8GB Ram and 128GB Rom.

In terms of camera, it has four rear cameras setup with 48 megapixels primary camera. It also has an 8-megapixel selfie camera with features that include Panorama, 4k video recording.

Oppo A53s 5G comes with 6GB ram and MediaTek Dimensity 700 octa-core processer will surely assure you the lag-free performance. This device is loaded with large internal storage of up to 128 GB.

This phone consists of 6.52 inched IPS ultra-clear display of an aspect ratio of 20:9 along with 269ppi. The display gets a 60Hz refresh rate of resolution 720 x 1600 pixels with side fingerprint unlock. The smartphone will run on a powerful 5000mAh battery for long-lasting performance.

In addition, the smartphone feature with triple camera on the backside of 13 megapixels and two 2 megapixel and one 8 megapixel front camera. Oppo A53s 5G is 8GB RAM Phones that can perform well in heavy usages.

Also Read: 6 Powerful Snapdragon 778g Phones in India That Are Suitable For Gaming And Multitasking

Realme 8 is one of the best 8gb Ram phones under 20000 rupees in India that comes super AMOLED display and quad camera setup.

It has a MediaTek Helio G95 processor and CPU supported by 8 GB ram with 128GB internal storage. The smartphone has a screen size of 6.4 inches and a decent resolution of 1080 x 2412 pixels.

The smartphone that manages to take place in our best gaming phones under 20000 8GB ram list is Xiaomi Redmi Note 10S. The device is supported by MediaTek Helio G95 Octa-core processor comes with two variants 6GB ram or 8GB ram.

With a display size of 6.43 inches AMOLED and a resolution of 1080 x 2340 pixels, the screen is protected by the corning gorilla glass v3.

The Redmi phone is featured with the 5000mAh Li-Polymer battery for seamless experience capability with a 33W fast charger.

This 8GB Ram Phone has quad rear camera setup with 64-megapixel primary camera that provide you high-quality photos and videos and it has 13 megapixel front camera.

Another product from our list of Samsung 8GB ram mobiles under 20000 is the Samsung Galaxy A22 5G. It is supported by the MediaTek Dimensity 700 processor and comes with two variants of 6Gb and 8GB. The smartphone also supported dual-core,2.2Ghz, Cortex A76, Hexa-core 2GHz, and Cortex A55 processes.

The smartphone also has a triple camera feature on the backside of the phone of a 48-megapixel primary camera and a 5-megapixel camera for ultra-wide angles along with 2 megapixels for depth sensing lens and an 8-megapixel selfie camera. This is one of the best samsung phones under 25000.

Lava Agni 5G runs on MediaTek Dimensity 810 chipset consisting of a Cortex A76 and Cortex A55 octa-core processor. It is capable to provide you with excellent performance with 8GB Ram and 128 GB ROM which is expandable up to 256 GB.

The IPS LCD 6.78 inches display features the 1080 x2460 pixel resolution with a 20:9 aspect ratio as well as 396 PPI pixel density. Furthermore, the screen is protected by the corning gorilla glass v3 as well. It is one of the best 8GB Ram Mobile under 20000.

In terms of battery power, it gets a 5000mAh massive non-removable battery for endless tasks and supports 30 watt fast charging. Also, the backside of the phone is equipped with an AI quad-camera which consists of a 64-megapixel primary camera followed by 5 megapixels and two 2 megapixel cameras.

Also Read: Top 4 Best Dimensity 800u Phones in India That Have Huge Demand in 2022

In the article, we have discussed the best 8GB ram phones under 20000 with better quality and various latest features. All these phones offer good performance because it has powerful processors with 8GB RAM. So, the review of these best 8GB ram mobiles under 20000 ends here, now you can choose the best phone according to your budget.

What are the best gaming phones under 20000 rupees?