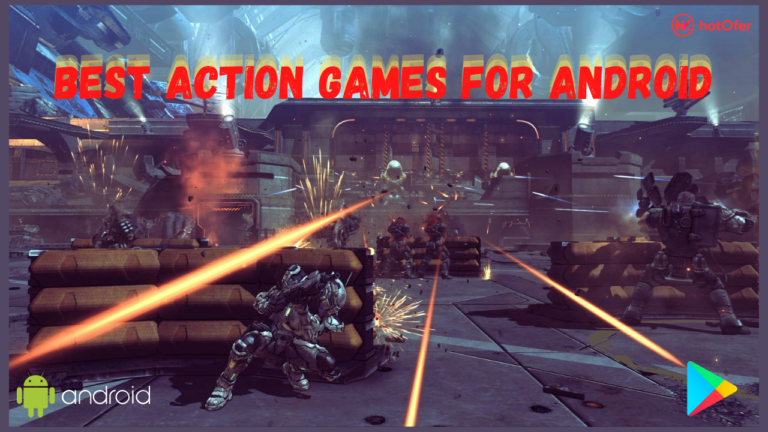 Hello Friends, if you are searching for some of the best online and offline action games, you are at the right place because here, we will review some of the best action games for android that you can play online or offline. Some games are very popular, and some are new in this review.

If you want to improve your attention better, then you must play action games. According to a study, the memory and problem solving abilities of people who play games were found to be more than those who never played any game.

Action games today become even more exciting thanks to state-of-the-art 3D graphics and enhanced audio quality. That is why we recommend playing the best action games on your android phone.

Today we have reviewed some of the best action games for android. If you like thrill and adventure, then definitely play these action games.

So, let’s start the review of the best action games.

In this post, we will be going to review the top 10 best action games for android that are available on the google play store for free. Also, we will share highlighted features of these games and the playing experience for better understanding.

Cover Fire is one of the best and most entertaining Action games available for android. This game can be played both online and offline. You will be the leader of your team in the war against terrorists or Zombies.

As you are army chief you have to lead your army in battle with rebels. This shooting game has various weapons and game modes that you can use for gaming. It is one of the best android games in India.

Warlike surroundings and terrain will be experienced while playing this game. The graphics and sound effects of this game have been very impressive. We will battle with our innate intelligence and our defence team to a destructive force called tetracorp to protect the world which will be a very thrilling experience.

If you want to play more exciting Action games then welcome to Worms Zone. This is one of the best action games for android. You can make your worms the biggest one by collecting various delicious fruits and powerups. You have to take whatever food you see and increase the length of your worm as much as you want. Stay away from other players.

It is a very exciting game in which you have to move very carefully keeping in mind both your insects and the high-intensity food area. Even small children can play this game.  It will not require much experience.  The game’s graphics are also very good.

It is one of the best action games for android. Sniper 3D is a snipping game in which you have to kill the target as mentioned. You will never target any innocent civilians.

The game has different modes and you will be able to upgrade your sniper while earning rewards. Also, you can play this game in offline game mode.

This game is very exciting. While playing this game, you will get the feeling of being a spy or an army soldier. You will get to know about the different types of rifles and you will be able to feel the reality of the scenes seen in the movies.

Free Fire game needs no introduction. This is a top-rated online action game. This game has been downloaded by more than 500 million people on the Google play store.

In this game, you have to go to an island sitting in a plane and complete your mission by killing the enemies hidden there. if you want to play the best adventure game then must try Free fire.

This game runs very well on mobile. The performance of this game is very good due to the transcendent graphics. By playing this game you will feel the operation of which army. You can also play this game by inviting your friends online. Anyone can play this game on any Android device.

The Shadow Fight action game that has hit the market a long time ago has many updated versions. this is a very nice mobile action game for android. To defeat the opponents, we will select three players who have more fighting abilities. We will choose the appropriate players to fight the opponent tactics.

This game runs very smoothly on mobile.  The animation of the warrior is very good. Its music is very mesmerizing, changing from calm atmospheric waves to distorted guitar sounds. This combat game is really very enjoyable. It gives a very pleasurable experience to do compensation while being saved from the enemy’s attack.

Hunter Assassin is a great online action game. It offers great gameplay for Android. You have to control your assassin and kill all the guards. You will use your surroundings and shadows to hide yourself. Each killed enemy will give you a diamond which you will collect to unlock the next stage.  The more gems you get, the more points you will get.

In this game, you finish a level in 15 to 40 seconds. At the end of each level, there will be a promotion. The game is easy in the beginning but it gets harder as you progress through the level. You have to keep your speed very fast to win this game.

Dead Target is a very interesting and very exciting online action game. This game is full of action and adventure. There will be some very strong stages and levels in this game.

Many zombies have occupied the city, your mission is to kill them all and save the city.  As you kill zombies you’ll get rewards that you can use to buy better weapons and bullets.

On reaching higher levels, some zombies grow in size, which makes them difficult to kill. The creators of this game have not put any promotion in it so that it gives an outstanding experience; this game comes with some casino wheels and watching videos, which you can get rewards by watching.

Gangster vegas is one of the best online action games. We play this game to become the leader of a gangster gang inside Los vegas city in gangster vegas. You can also purchase houses and property thereby earning money while fighting the criminals and gangsters in Las Vegas city.

Overall it’s a very interesting and fun-loving game that requires very high attention tactics. this game is the package of racing games and action games, you can do missions on this game using bikes and cars.

Listen carefully to the script of the game and start your mission. Build your team to take over the city of Las Vegas. Explore the map that appears in the game completely. You face different stage zones like races, MMA fights, casino games, and carnage missions. Try to achieve the lethal weapons and vehicles very early.

It is a top-rated action game for android. Critical Ops is a mobile game in which we kill the opponent with bullets. In this, the battle is fought with the terrorists at a very fast pace. We work as a team to fulfil our mission.

In this game, there are many types of rifle hand grenades which we should know to use very well and according to the opponent we use these weapons. It is one of the best multiplayer games for android.

You will start the game by pressing the play button in the main menu. In this, the option of Quick Game and Custom Game will be available. If you have taken a custom game, then you can customize it according to you. The team that kills the most opponents is the winner.

World War Heroes are among the Best action games for android. This game will make you feel like you are fighting a world war. You will be equipped with various types of pistols, machine guns, assault rifles and weapons along with vehicles.

This game has mesmerizing animation, attractive graphics and better sound quality. Different modes of the game enable users to use more lethal weapons. it is the best action game which available on the google play store.

First of all, we will go to the settings of the game and set it accordingly, like zoom, auto fire. You will choose the weapon. There are many weapons, and they can also be upgraded. You can fight as a soldier of any country from America, Russia, Germany, or Japan.

Playing online or offline games is an exciting experience, out of which action games are even more thrilling. All the games mentioned above are fascinating, which you must definitely try. we hope you like the review of the best action games for android, all these games are free, and you can download them from the google play store.

What are the best action games for android?

Which is the No 1 action game in the world?

There are many action games available, but free fire is one of India’s famous and most downloaded action games. This game is available on the google play store and Apple apps store.

What are the best offline action games for android?

List of the best offline action games for android.