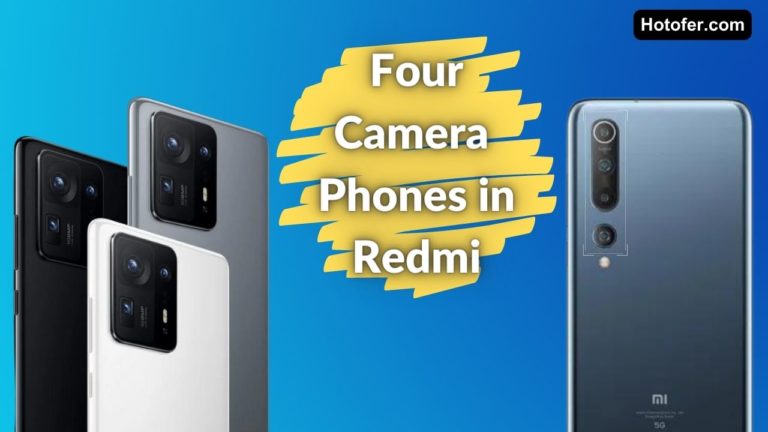 Hello Guys, if you are looking for a quad-camera setup’s Redmi phones then you are at the right place because here we will share some of the best Four Camera Phones in Redmi that come with good camera specs.

Quad-camera setup phones are not such a craze in 2022, but most people still search for Redmi phones with 4 cameras. Due to this many brands launch many phones with poor camera specs to mislead the users. Currently, you need to do thorough research in the market to buy a perfect Redmi 4 Camera phone.

To make your research easier, we will write this article, here we will review the top 6 Redmi phones with a quad-camera setup.

List of the Best Four Camera Phones in Redmi

So, lets start the review on Best Four Camera Phones in Redmi.

The Redmi Note 11 Pro is the first phone that comes on the list of Redmi Four camera phones. It has a 108 MP Wide Angle, Primary Camera with an f/1.9 aperture that has a 1.52-inch sensor size.

The main camera has various optimistic features like 8 x Digital Zoom, Auto Flash, Face detection, and Touch to focus. Also, its cameras capture videos up to 1920×1080 at 30 fps. Redmi Note 11 Pro is one of the Best Camera Phones Under 20000 in India.

In addition, It has a 5,000vmAh battery that supports 67W Turbo charging, which can be fully charged from 0 to 100% in just 30 minutes. There are dual speakers, a side-mounted fingerprint scanner, a micro-SD card slot (hybrid), and Hi-Res audio support for the 3.5mm connector on the phone.

This Four Camera Phone has an AMOLED display with a 120Hz refresh rate and has Corning Gorilla Glass v5 protection on the screen and 1200 nits of peak brightness.

The main camera can shoot videos up to 1920×1080 at 30 fps and 1280×720 at 30 fps. This is perfect budget phone that packed with amazing features, it has AMOLED display with 90 Hz refresh rate and the screen is protected by Corning Gorilla Glass v3. 5000 mAh battery gives 2 days of battery in normal use, it can be fully recharged in just 45 to 50 minutes with 33 W fast charger.

This Redmi 4 Camera Phone powered by Qualcomm Snapdragon 680 which is suitable for normal gaming, multitasking and day to day task, it is one of the best budget smartphone under 15000. The phone has side mounted fingerprint sensor to quickly unlock this phone.

One of the Redmi Note 10’s features is its 33W rapid charge. It’s good to know that the gadget comes with a 33W charger in India and 5000 mAh battery capicity. There is a USB Type C port for charging and data transfer as well as dual-SIM 4G connectivity.

With a 6.43-inch display, the Redmi Note 10 has a AMOLED display and a 60Hz refresh rate. Corning Gorilla Glass 3 shields the screen, which can reach 1,100 nits of brightness at its bright test point.

Android 11 with MIUI 12 modification powers the Redmi Note 10, which has a Qualcomm Snapdragon 678 processor. In India, the phone is available in two variants, its base variant has 4GB with 64GB ROM and 6GB with 128GB ROM.

The Redmi Note 10 has four rear cameras on the back, including a 48 MP primary sensor, an 8 MP ultrawide lens, a 2 MP macro camera, and a 2 MP depth sensor. When using the phone’s primary camera, the user can record 4K videos at 30 frames per second. A 13MP camera is provided for selfies. This Redmi Four camera phone is good smartphone for vlogging and media consumption.

In terms of performance, this device powerd by MediaTek Helio G96 chipset that is based on 12 nm fabrication technology and Mali-G57 MC2 GPU boost the graphics during game plays.

This phone has 5000 mAh battery capicity that deliver 36 hours of battery backup in normal usage and it comes with 33 W fast charger that fully recharged this phone from 0 to 100% in just 45 minutes. Redmi Note 11s comes in two different variants in India under 20000 price tag.

For the first time, Xiaomi’s Redmi 10 Prime has a phone with four cameras, it comes with a 50-megapixel cameras on the back, an 8-megapixel ultra-wide sensor, a 2-megapixel macro sensor, and a 2-megapixel depth sensor make up the system. This phone has an 8-megapixel front-facing camera for taking selfies and video calling.

Having a high-resolution camera on the front of the Redmi 10 Prime is listed in the Four Camera Phones in Redmi. Although the other sensors have their limits, you’re left with a mediocre set of components.

In daylight, the main 50-megapixel main camera produces decent photographs, however, you may notice more sharpness in details. When viewed from a distance, the subject’s color temperature appears to be well-balanced as shown in the photographs below.

In terms of battery backup, this phone packed with 6000 mAh massive battery which supports 18 W fast charging, it one of the best long battery backup phone in India.

Redmi 9 Power has a 6.53-inch IPS LCD screen with a 20.6:9 aspect ratio and a maximum brightness of 400 nits. This is the brightest phone in its class and Corning Gorilla Glass 3 shields the display, which offers a typical 60Hz refresh rate. The Qualcomm Snapdragon 662 processor in the Redmi 9 Power is created using a 11 nm fabrication technique.

The Quad camera arrangement on the back of the Redmi 9 Power is accompanied by an LED flash. The phone’s primary camera has a 48MP with an F/1.79 aperture, a 8 MP Ultra-Wide Angle Camera with an f/2.2 aperture. There’s also a 2MP portrait lens and a 2MP of macro camera with f/2.4 apertute, It has 8 MP front-facing camera to go along with the device. All these cameras make this best Redmi 4 camera phone.

So, Guys, these are the best Redmi phones with a quad-camera setup on the back side, These phones have all four types of cameras in the rear camera setup, that you can use to take all types of photos in different-different modes.

From these best Four Camera Redmi Phones, we personally use Redmi Note 11 Pro and we are impressed with its camera quality, it can take really good photos in daylight and low light.

So, the review of these Redmi Quad Camera Phones review ends here, now you can buy any of them according to your choice, and now the article ends here, you can share this article if you like it and comment with your feedback.

Which latest Redmi phone has 4 cameras?

List of the Latest Four Camera Phones in Redmi.

What is the use of 4 cameras in mobile?

The phone’s 4 Camera setup featured with the main camera, an ultra-wide lens, a macro lens, and a depth lens, this lens can capture photos in different resolutions that can be used for taking impressive shoots.