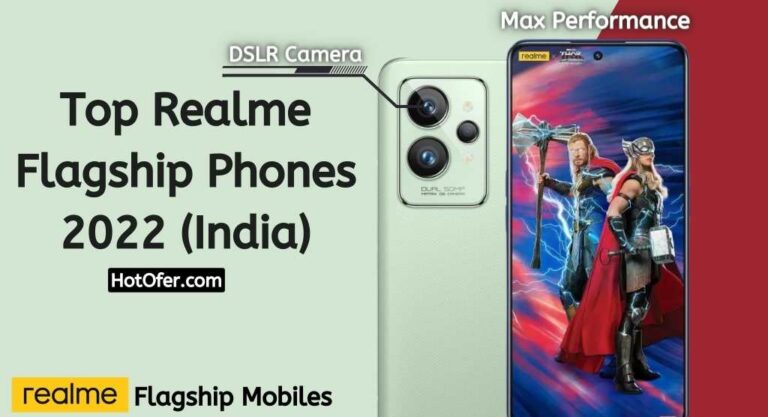 Hello, Guys, If you like playing games, multitasking, and photography, then you need a flagship smartphone, but these days, flagship phones start at around 50000 prices but don’t worry; in this article, we will share the top Realme flagship phones in India that provide outstanding and powerful features under 40000 rupees.

So, let’s start the detailed review of these best Realme flagship phones in India.

Realme GT 2 Pro is the most premium, expensive and powerful phone manufactured by Realme in 2022 for Indian users, and it was launched on 14 April 2022.

Realme GT 2 Pro gives a top-notch performance where in terms of gaming, users can play games up to the highest graphics setting with no lag, and they get sustained GT feature, which allows background apps to run smoothly. At the same time, you do multitasking and multimedia consumption on this phone with stereo speakers.

This immersive Realme Flagship phone comes with a nonremovable 5000 mAh Lithium Ion battery with a 65 W dart charger in the box. Realme claims that this phone lasts up to 15 hours after fully charging and will be fully charged from 0 to 100% in just 30 minutes.

Realme GT 2 Pro delivers a chipset of Qualcomm Snapdragon 8 Gen 1, which is known as one of the fastest processors with a 4 nm fabrication CPU. This Realme phone runs on the customized Realme UI 3.0 based on the Android 12 operating system.

Realme phones are popular in the Indian Market because of their enhanced beauty plus cameras. This phone has a triple rear camera setup that features a 50 MP primary camera, a 50 MP ultrawide camera and a 2 MP camera with a microlens.

It has a selfie camera of 32 MP installed in the punch hole of the display. Its primary rear camera can capture 8K video at 30 fps, and a front camera can record1080p videos at 30 fps. Currently, it is one of the best camera phones under 50000 in India.

In the Realme flagship mobiles review, the next phone is Realme GT Neo 3. It is the first phone of Realme which has 150 W charging support. It provides a 5000 mAh battery that gives battery life up to 24 hours easily after getting fully charged with an 80 W fast charger.

As this phone comes with an android 12 operating system that is customized with Realme UI 3.0, it maintains the stability of graphics for gamers with capacitive multi-touch features.

Realme GT Neo 3 has one of the best 6.7 inches punch hole AMOLED display, having a refresh rate of 120 Hz. It has 1000 nits of peak brightness that make it visible in outdoor lighting. Also, The screen is protected with Corning Gorilla Glass 5.

This Realme flagship phone 2022 is packed with an excellent processor of Mediatek Dimensity 8100 5nm CPU and 64-bit architecture. Users can get this device in two variants with three colors.

The front and back panels of this flagship level phone are made of glass material protected by gorilla glass protection. With all these features it is one of the best phones and also the fastest charging phone in India.

Realme claims that Realme Gt Neo 3T is one of the most affordable 80 W fast charging phones and has some excellent characteristics to lie under the category of realme flagship mobiles.

Realme Gt Neo 3T has a huge 5000 mAh battery of Li-Ion material which takes less than 30 minutes to get fully charged with an 80 W superfast Dart Charger.

It has a 120 Hz capacitive touch screen with a super AMOLED display of 6.62 inches. The display is protected by the corning gorilla glass 5, and it has 1300 nits of peak brightness.

Realme Gt Neo 3 is available with Qualcomm Snapdragon 870 octa-core Cpu with a 7 nm fabrication and Adreno 650 GPU. Also, It is customized with Realme UI 3.0, which is based on the Android 12 operating system.

It has an 86% screen-to-body ratio with glass back panels and gorilla glass protection, which comes in two variants and three colors.

One of the top specifications of this Realme flagship phone is that it comes with a triple rear camera sensor of 64 mp wide-angle primary camera along with an 8 mp ultra-wide angle and 2 mp macro camera. It has front camera support of 16 mp.

The last phone in the list of Realme flagship mobiles is the Realme 9 Pro Plus, which contains a Super AMOLED display of 6.4 inches screen with a 90 Hz refresh rate, which has a resolution of 1080 × 2400 pixels. This punch hole display has corning Gorilla Glass V5 protection.

This Realme Flagship Phone 2022 comes with a nonremovable battery of 4500 mAh, which takes only 30 minutes to get fully charged with a 60 W super fast Dart charger and runs 20 hours.

This Realme phone is powered with a chipset of Mediatek Dimensity 920 based on a 6nm fabrication and 64-bit architecture. It has a Customized version of Realme UI 2.0, which is based on an Android 12 operating system.

As we know, this Realme flagship phone is popular for to its camera setup. It delivers a triple rear camera setup of 50 wide-angle primary cameras with OIS and Sony IMX766 sensor. Also, it has an ultra-wide camera of 8 MP with a Sony IMX355 sensor and the last 2 MP macro camera with Galaxycore GC02M1 sensor, which has an autofocus face detection feature.

So, the review of these Realme flagship mobiles ends here; now, if you like any phone from the revies, then buy it using Buy Now button; all these flagship phones are available for purchase Online and offline stores. We personally like Realme GT Neo 3T as it comes under 30000 rupees with unbeatable features.

What are the best Realme flagship phones in India?

List Of The Best Realme Flagship Phones 2022 in India