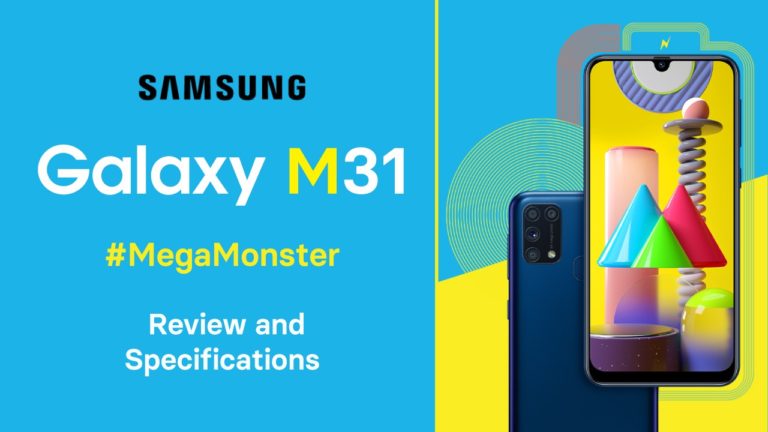 The market price of the former 64GB storage model is Rs 15,999, whereas the 128GB storage model costs Rs 16,999. But recent discounts on the models have decreased the rates of both models by Rs 1,000. The models come with expandable storage of 512GB. Both models support 4G LTE/VoLTE Nano-SIM. They also have support for WiFi, GPS, and Bluetooth.

The Samsung Galaxy M31 comes with a One UI 2.0 Android 10 software. There are many pre-installed apps on the phone. These include Candy Crush Saga, Netflix, Facebook, My Galaxy, Samsung Shop, and Samsung Max. The smartphone also comes with Dark Mode, Focus Mode, Dolby Atmos, Digital Wellbeing, Parental Controls, double-tap wake gesture, and navigation layout with three buttons for full-screen gestures.

The Samsung Galaxy M31 comes with a four rear camera setup configuration and a 32 megapixels front camera. The primary rear camera has a resolution of 64 megapixels with f/1.8 aperture. Next, comes the 16-megapixel camera that takes far away shots and even allows switching to full resolution. The 8-megapixel camera is capable of taking ultra-wide angle shots up to 123 degrees and comes with an f/2.2 aperture. Last among the rear cameras is the 5-megapixel macro camera with a depth sensor.

All cameras showcase the utmost clarity in daylight; however, they lag drastically in low-light conditions. The photos showcase decent detailing with automatic HDR and lock focus. Some reviewers were not convinced with the wide-angle camera as they witnessed distortions. Close-up shots depict depth, detailing, clarity, and capable of being focus-centered. The selfie camera doesn’t allow background blur options, but the edge detection works spectacularly to focus on the subject.

The rear camera autofocus duration increases during low-light conditions and showcases fine grains on zooming the camera. Fortunately, the night mode option of the camera decreases the grain output on zooming in. Similarly, selfies taken in low-light deteriorate the quality, whereas a decent output is visible in normal light conditions.

The Samsung Galaxy M31 comes with a 4K video shooting rear camera and front-facing selfie camera. The video quality may be impeccable during normal conditions; however, the footage may be unstabilized without using the Super Steady mode. But the latter lags video is detailing, and the phone does not offer stabilization with 4K.

But, as discussed above, the picture quality suffers significantly under low-light conditions. The Super Steady mode can improve the picture quality; however, it has a few limitations. Similarly, the performance is adequate for heavy pre-installed apps like PUBG but may not be perfect for others. On the other hand, light gaming apps may not showcase any such issues. Therefore, gamers might get disappointed. Meanwhile, streaming videos does not heat the phone much, and the battery life can last for more than two days without any need for charging.

The smartphone may not have infrared and NFC capabilities but does include GPS, Bluetooth, and USB C-Type OTG. Also, there are no complaints regarding disconnecting SIM networks while watching streaming videos on Netflix and Amazon Prime on a nano-SIM that supports 4G LTE/VoLTE network. Besides gaming, the performance of M31 is on par with its competitors, as it is highly responsive.

But a few reviewers complain that it hangs up operations now and then. Unfortunately, we cannot state whether it is true or false because there are very few buyers who have made such a complaint. The phone is responsive to sensors like face unlock, fingerprint, compass and magnetometer, proximity, accelerometer, Ambient lighting, and gyroscope.

At the same time, it showcases drawbacks like the unavailability of Snapdragon series-7, design similarities similar to the M30, and lower performance with HDR-Ultra mode. Moreover, reviewers may not be happy with the fact that the M31 asks them to install other apps, and My Galaxy regularly sends notifications, most of which are promotional.

The Samsung Galaxy M31 comes with a 6000mAh battery along with a 15W charger. The battery can last more than twenty-two hours before it requires charging, and some reviewers said that it could last for two days. Unfortunately, the phone might get a bit heated while playing massive games like PUBG.

The M31 comes with four rear cameras and a single selfie shooter. The former includes 64 + 8 + 5 + 5 megapixel rear cameras and 32 megapixels front-facing camera. We found that the camera matched its competitors and lagged significantly under certain criteria, especially in low-light conditions, and discussed it under the specs section below.

The Galaxy M31 comes with a Widevine L1 full-HD AMOLED waterdrop notch 6.4-inch display. The smartphone offers 1440 x 2400 full-HD and Gorilla Glass 3. It is not only scratch-resistant but also more drop-resistant than the GG5 and GG6 phones. The phone does not come with any pre-installed scratch guard or a plastic screen protector. The phone comes with a darker dark mode and an Always-on display. Also, there are two color profiles, namely, Natural and Vivid, wherein the former is neutral white, whereas, the latter depicts a bluish-white display. Toggle feature allows users to adjust the white screen balance.

The performance of the Galaxy M31 is also impeccable due to the newest 10nm Exynos 9611 octa-core SoC. The software has undergone testing with the launch of Galaxy A50, A50s, A51, and M30. Gaming users might be disappointed because it doesn’t come with Snapdragon series-7, but others might be very fond of its other performance features. Also, pre-installed PUBG runs adequately, as discussed before.

Additionally, low-end games might run smoothly on the system. To date, Samsung is the performance leader with LPDDR4x RAM and UFS 2.1. The base model comes with a 6GB RAM and 64GB storage, whereas, the storage of a higher model is 128GB. Both of them come with expandable storage of 512GB. The model’s RAM was increased from 4GB to 6GB.

Moreover, the Android 10 OneUI 2.0 software is more advantageous than the most Chinese UXs. The phone received a DRM L1 certificate, and therefore users can stream HD content through apps like Netflix and Amazon Prime. The Dual-SIM 4G VoLTE phone does not show any connectivity errors.

The M31 derives inspiration from the M30 models, and spectators can hardly differentiate it from its predecessor in the first look. The smartphone comes with a 6.4-inch Infinity-U display surrounded by side bezels. It has smooth edges, round corners, and a perfect grip. The right side of the phone encompasses volume and power buttons, whereas the left side hosts slots for MicroSD and SIM cards. At the bottom, one can find a USB Type-C charging port, a mono speaker, and a 3.5 mm audio input jack. The front comprises a 32MP camera, and the back panel includes a quad camera setup. The rear also includes a fingerprint sensor and a Samsung branding.

The Galaxy M31 is one of the best mobiles under Rs 20,000. It is an upgraded version of the M30 and includes features like a fourth camera, Android 10, and more RAM space. The Exynos 9611 puts its performance at a competitive level but draws it back under the gaming segment. However, the battery life lasts for more than two days, which outweighs most of its rivals. Unfortunately, rivals like Redmi Note 8 Pro and Realme X2 offer more value for money than the Galaxy M31. Conclusively, based on our expertise, we have drawn the following ratings for the 2020 Samsung Galaxy M31:

Does the Samsung Galaxy M31 Feature Include Slow-motion Video Recording?

Yes, the M31 comes with a slow-motion video recording of up to 480fps.

Do Any of the Cameras Support Optical Zoom?

No, all rear and front cameras don’t have a telephoto lens, and therefore, they don’t support optical zoom.

What Are the Default Gaming Setting for PUBG on M31?

The default PUBG settings include HD graphics and frame rate with the option of switching to HDR Ultra. But we would like to inform you that it might perform better with the default PUBG gaming settings.

The M31 offers a better camera, battery life, and software than the POCO X2, whereas the latter provides the best selfies. Therefore, the M31 outweighs the POCO X2 many more aspects.

What is the Average Refresh Rate of the M31?

The Samsung Galaxy M31 has a refresh rate of 60Hz.

Yes, according to sources, the 8GB RAM and 128GB storage phone was launched around June 17 and is available for purchase on online stores include the Samsung website.

What is the SAR Value of 2020 Samsung Galaxy M31 Smartphones?

No, the 2020 Samsung M31 models do not support wireless charging.

What is the Battery Type of M31? Is it Removable?

The M31 comes with a non-removal Li-Po battery.

The 6000mAh battery M31 smartphones come with fast charging with a 15W battery capacity and using a Type-C USB OTG. It takes 120 minutes to charge the full phone, and the charge lasts for more than two days.

If you are planning to buy Samsung mobile, then the M31 may not disappoint you. It offers a battery life of up to two days without any need for charging. The phone also delivers the best gaming performance with its default setting and comes with many upgrades compared to its predecessor, M30.

Some might even call it the improved model of the M30 as it comes with a fourth camera, Android 10, and increased RAM space. Unfortunately, it also encompasses many drawbacks like high market price compared to rivals and unavailability of Snapdragon series-7, which might keep gaming enthusiasts away from it. Therefore, we can give it an overall rating of 8/10 for both its pros and cons.