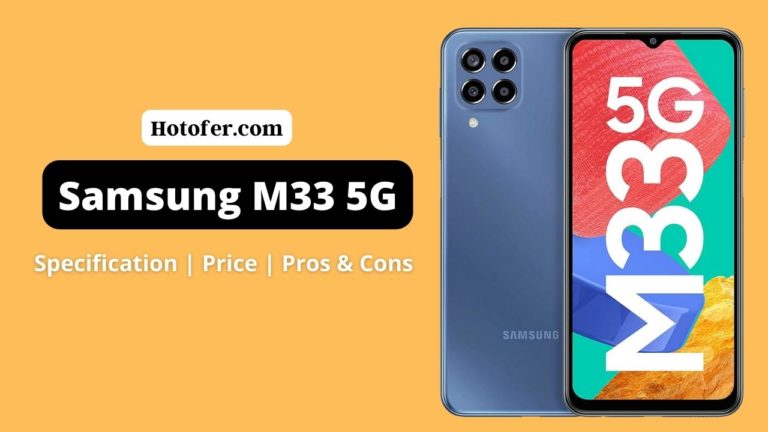 Hello Guys, if you are looking for the best quality smartphone that has amazing features and good design then you are at the right place because here we will share a detailed review of the Samsung Galaxy M33 5G which is a really good smartphone in terms of specs and design.

In the budget segment, people are always on the lookout for a reliable, long-lasting smartphone that has maximum features at a low price, which is why Samsung launch some great smartphone in this price segment. Currently, they release their latest Samsung Galaxy M33 5G with some really good specs, also, it has some features which downgrade this smartphone.

Throughout this article, we’ll share all the aspects of the Samsung Galaxy M33 5G, and tell you whether it’s worth buying or not.

The phone is available on Amazon and Flipkart for the same price that we mentioned, but you can get maximum bank offers on Amazon.

Samsung’s newest addition to its ever-expanding portfolio in Galaxy M series smartphones is the Galaxy M33 5G, it was launched in April 2022. The new Exynos processor drives the Galaxy A53 5G. It has some amazing features such as a 6,000 mAh battery, the latest OS, and a 5G connection. This phone comes in two different variants and three colors,

The Samsung Galaxy M33 is another 5G phone that comes with 12 5G bands at this pricing point. The phone base variant starts at Rs 17,999 and is powered by Samsung’s Exynos 1280 processor. Above all, it retains the 6000 mAh battery found in other M series phones. But is that enough to make this phone a good recommendation? In this review, we’ll discover out.

What Comes in the box of Samsung Galaxy M33 5G?

Guys, Samsung has not packed the phone with the charger in the box, which means you have to buy a charger out of the box which costs around ₹1149 for the 25W fast charger.

Other box contents of the Samsung Galaxy M33 5G are mentioned below:

The Samsung Galaxy M33 5G has a nice, clean appearance, although it isn’t very distinctive. It has a waterdrop notch on the front and a conventional square-shaped camera module on the rear. The Galaxy M32 served as design inspiration and is available in three colors, Deep Ocean Blue, Emerald Brown, and Mystique Green.

In my perspective, the form factor is adequate. This device is ideal for playing games, watching videos, typing messages, and sending emails. However, I believe the weight distribution could have been better.

Although the larger battery increases the weight, this isn’t the first Samsung phone with a 6000mAh battery. There are models with large battery configurations that are nevertheless nicely balanced.

Despite the lack of an AMOLED panel, the Samsung Galaxy M33 5G’s display is extremely bright in direct sunlight. It has a 6.6-inch Full HD display with a refresh rate of 120Hz and Corning Gorilla Glass on top. The top of the phone has a waterdrop notch, while the sides have thin bezels.

The Samsung Galaxy M33 5G has a good multimedia experience. The screen was bright enough at 60% and the colors looked bold, whether it was for viewing YouTube videos or Netflix episodes or simply browsing Instagram or Twitter. In addition, the viewing angles were excellent.

At this pricing point, it’s great to see Samsung provide a 120hz panel refresh rate. On paper, it appears to be effective, but in practice, there are no substantial differences.

Samsung Galaxy M33 5G comes with Samsung Exynos 1280 processor that is based on 5nm fabrication technology, this chipset is capable of running games, day to day tasks, and multitasking.

This phone has the latest One UI 4.1 user interface which is based on Android 12, the brand promise two years of regular updates and security patch in this phone, also, in this smartphone, also, you will get Knox security and NFC support.

On the front side, it has an 8-megapixel front-facing camera with an f/2.2 aperture. The main camera can shoot videos up to 3840×2160 at 30 fps and the front camera also can record videos up to 1920×1080 at 30 fps. The camera software has many features that help to take better photos and videos.

In both day and low-light scenarios, the primary lens was able to produce decent photos. The photographs have a lot of detail and are realistic. The good news is that the images were never overly saturated or vivid.

In this price range, the camera’s low-light performance was also very good. A night mode enhances photos taken in low-light conditions. Overall, the Galaxy M33 5G appears to be an excellent alternative in the pricing range if you enjoy uploading images on Instagram and Facebook.

The portrait images are also fairly nice, with a well-blended background and sharp outlines. However, I believe that the overall performance may have been better. The details are frequently absent in macro photographs. In this one, the colors are quite nice. The ultra-wide lens also frequently misses out on details, which is somewhat chevalier.

One of the best features of the Samsung Galaxy M33 5G is its battery size, it has a 6000 mAh battery size, the phone can easily last a full day under heavy usage and can easily survive for two days in normal usage. Plus, on a single charge, moderate usage can easily extend the battery life to 1.5 days.

Although it supports 25W fast charging, it comes without a charger, Only a USB Type C cable comes in the box. the 25W fast charger recharges this phone from 0 to 100% in 1 hour 30 minutes.

Moving on to the conclusion, undoubtedly the Samsung Galaxy M33 5G is one of the best Samsung smartphones and a worth buying smartphone under the 18000 price tag, but if this phone had an AMOLED display type then it would have been more value for money. Apart from this, this phone is good for gaming, multitasking, and internet surfing.

Also, it is a futuristic phone with 5G connectivity, which has 12 5G bands, if you are looking for a good phone with high-quality features then definitely buy this Samsung smartphone, but you have to compromise on the display.

So, friends, Samsung Galaxy M33 5G review ends here, now you can buy it. If you like this phone, use the button below to buy this phone.

How many 5G bands are there in Samsung Galaxy M33?

What is the battery capacity of the Samsung galaxy M33 5G?

The phone is powered by a massive 6000 mAh battery, which gives a battery backup of 2 days in normal usage.

Is samsung m33 5g worth buying?