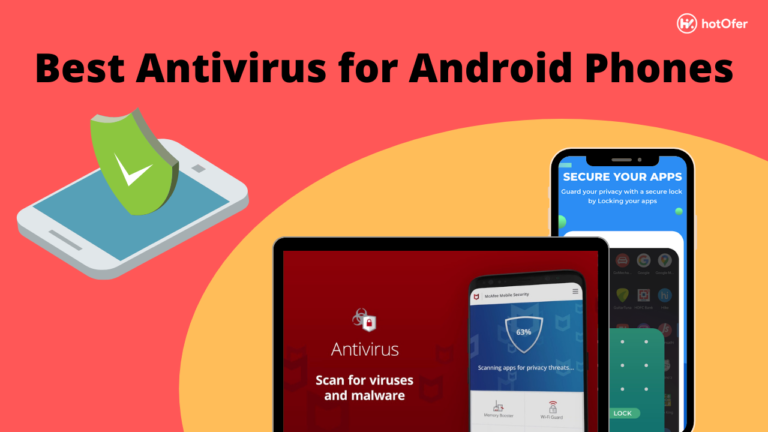 Hello Friends, if your phone does not work correctly or your phone processing is slow. In this situation, you can use Antivirus on your phone; if you are looking for the best Antivirus, you are at the right place because we will review some of the Best Antivirus for Android Phones that protects your phone from virus or any other cyber attack.

Android is the world’s most widely used operating system, which means that it is also the biggest target for malicious users. This is why installing the best Android antivirus apps on your smartphone is essential.

If you do not have at least one of these apps installed on your Android phone, you expose yourself to the risk of privacy by corrupt apps and other types of malware. However, their protection options are limited.

The Best free antivirus for android not only offers world-class malware detection and prevention but also security of privacy and anti-theft features. So, let’s see some of the Best Antivirus for Android Phones.

Review of the Best Antivirus for Android

So, let’s start with the review of the best Antivirus apps

Avira Antivirus Security for Android Phones is one of the Best antivirus for mobile in India.

The free version has no advertising, supports many features, and includes a permission manager that evaluates applications on a privacy scale to help you decide which apps are worth trusting your data.

Avira has grown enormously in the last year or so. The app includes the basics such as device scanners, real-time protection, external SD card scans, and much more.

Other features include support for anti-theft, privacy scans, blacklists, and device management functions. The app also comes with a VPN for an extra level of security.

You also get a number of anti-theft features, including the ability to locate your phone, trigger alarms, lock or delete the whole data of your Android or iOS device.

Pros and Cons of Avira Antivirus 2021

Web protection only in the paid app

Avast Mobile Security Antivirus is one of the most comprehensive and Best antivirus for android mobile with privacy advisors, system optimization, and customizable blacklists.

This app can be used either for a fee or for free, but the free version supports advertising. You can pay a small monthly or annual premium to remove the advertisement if it bothers you.

Another useful premium feature of the app is to lock the device and require a PIN to open certain apps. This prevents malware from getting into apps and it also protects your android phone from viruses that usually come through the Internet.

Pros and Cons of Avast Antivirus

Advertisements in the free version

AVG Antivirus is a high-quality and Best antivirus for mobile in India. It offers an impressive level of protection free of charge.

In fact, it uses the same and very popular antivirus engine as Avast. You can search your phone for potential vulnerabilities in the same way. This is not the same product and it does not have all the features you will find in Avast’s Antivirus.

It has built-in robust antivirus and anti-theft protection that allows you to locate, lock, and delete stolen or lost phone data.

Pros and Cons of AVG AntiVirus

Ads on the free version

The Bitdefender Antivirus for mobile features flawless malware protection and fixes the problem of low performance in Android phones.

It provides real-time protection against autopilot functions of the Google Chrome browser and claims to be able to make intelligent recommendations for security measures depending on the system and typical usage patterns.

It offers basic scanning features, a simple interface, and a fast performance configuration. This is a great solution to basic needs. It scans stuff, then sits back and waits to scan it again.

Unlimited VPN service can be costly

Founded in 1992, the Russian developer has a wide range of security products for desktop and mobile devices. Dr.Web security space is one of them, which includes antivirus, URL filtering, firewall, spam filters, parental control, and much more.

Dr. Web Security Space Is one of the oldest antivirus and anti-malware apps. It has a small selection of tools to complement its main antivirus features. It has a decent set of features, including faster and more complete scans, protection against ransomware, quarantine space, and statistics.

Its data loss prevention utility creates local copies of critical files that remain accessible in case of damage or destruction of the original.

A separate manager allows users to view, delete, or share files that are considered suspicious.

ESET Mobile Security and Antivirus is a big name in the antivirus and anti-malware world and it is the Best free antivirus for android. It has a decent set of features, including scanning, anti-theft support, security auditor features, scanning schedule, and more.

ESET’s malware scanner is the most advanced of all. It uses heuristics and machine learning to identify malware, but it is based on scanning.

The setup process can be a bit intrusive at first. It is one of the few that requires an e-mail address. But once it’s in, everything else works smoothly.

It scans your phone the first time you activate it and provides constant protection by scanning each new app while downloading it. If it detects something unusual, it alerts you and gives you the ability to ignore it or delete it.

Pros and Cons of ESET Mobile Security and Antivirus

Kaspersky Mobile Antivirus is also known as Kaspersky Internet Security is one of the Best antivirus for android mobile. It provides nearly perfect malware protection for small systems, without affecting the accuracy.

Free users get call filtering, Android Wear support, a number of powerful anti-theft features and you can scan new apps.

Not only that, but you also benefit from the heavyweight anti-theft features of Kaspersky Mobile Antivirus which allow you to locate the location of your Android device if it is lost or stolen.

Anti Phishing feature is only in pro version

It’s easy to use, clean interface and lacks advertising, that is why it is very much popular among people.

It is pre-installed on many devices from providers. Lookout Mobile Security & Antivirus is pretty simple at first glance. It scans for malicious software and finds lost phones through the anti-theft feature.

Malwarebytes is one of the most popular Best antivirus for mobile in India. It has all the basic security features you would expect from an antivirus program including malware protection, ransomware protection, and web protection.

The mobile version is also quite good. It has an updated virus database, support for malware, ransomware, permission trackers, and more. Malwarebytes uses a signature-based approach and heuristics to detect malware.

This means that it has a malware database it uses to detect the malware on your system and that it scans files for suspicious behavior to identify new malware that has not yet been added to the database. Malwarebytes does all the usual things like scanning.

Pros and Cons of Malwarebytes Security

McAfee evaluates the security of the Wi-Fi network you’re connected to and has several features that help keep your phone running smoothly, including a memory cleaner, memory booster, and battery booster.

Other features include the ability to scan apps to check if they leak sensitive information and block them if necessary.

Norton is one of the Best Antivirus for Android Phones. The app has a lot of basic features, including protection against malware, spyware, and other bad things.

Norton Mobile Security for Android offers a lot of features, including App Advisor, which is powered by Norton Mobile Insights and reviews apps for potential privacy risks and other undesirable behaviors in your phone

It also checks apps in the Google Play Store for security and privacy risks before you install them.

Pros and Cons of Norton 360

Premium Version is a little costly

It scans your apps for potential malware activity, but its finderate is slightly higher than we’re willing to believe. The Safe Security antivirus scans your device and network according to the latest malware threats.

It protects you from viruses, spyware, and other security threats by delivering real-time updates to protect your device.

Safe Security is the leading antivirus app for Android. It features an internet security system, a virus scanner, and a phone booster. It scans your device to find viruses and malware, blocks hacking attempts, and prevents phishing emails from your inbox.

So, these are some of the Best Antivirus for Android Phones, you can use to protect your android phones and tablets. If you want to be secure on the internet and want to protect your device from harmful Malware and Viruses then you must install any one of these applications on your Android Phone.

Well, almost every application listed above is free and available on Google Play Store, However, there are some in-app purchases. This means you can purchase the premium version of these apps to get more advanced features.

Heartfelt thanks for Reading!

What are the best free mobile antiviruses for Android?

List of the Best free mobile Antivirus for Android.

Yes, Android Phones need Antivirus because when we download any file from google, sometimes viruses or unwanted files come with the downloaded file. These types of files do not detect without Antivirus.

Still, if you use Antivirus on your phone, it scans every file after downloading and deleting the virus and malware without deleting the downloaded file. Also, Antivirus boosts phone performance, removes viruses or malware from the phone.

Yes, Mobile Antivirus really work; it can boost your phone’s performance and get you safe from any virus and other unwanted files. If your phone works slow, then you can scan your phone to detect the virus.

Which apps are the best for removing viruses?

There are lots of apps that remove viruses and malware from the phone. Here, we will share some of the best apps for removing the virus.

How can I protect my phone from viruses for free?

You can use antivirus to protect your phone from viruses, cyber attacks and malware. Also, when you download any suspicious file from google, then it scans the file to eliminate the virus and save the safe file on your phone.