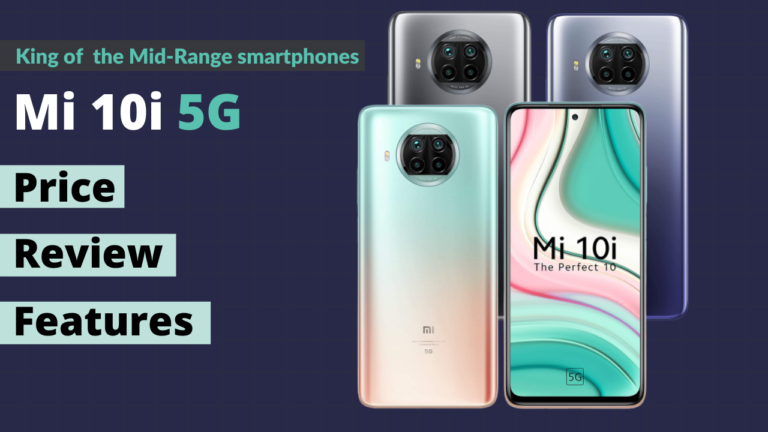 Xiaomi Launches its new phone in the Indian market. now they announce its first 5G phone of this year, in the launch event Xiaomi release some best specifications. they pack the smartphone with powerful features for its users.

Now, Xiaomi Mi 10i 5G leads in India as the best features phone with 5G connectivity. here we will do a detailed review of Mi 10i 5G. through review, every major specification covers in the article.

In the end, we will share a strong opinion about the phones whether it is worth buying or not. as an Indian user how much this phone is capable let us know through this article.

The box of any smartphone is a very interesting part for every buyer who purchases a new smartphone. because the feeling of the buyer is to fill with happiness and kindness when they open the New phone box the very first time.

the expectations fill to meet with the box packing of the Mi 10i 5G. the smile showed on the buyer’s face by the new phone.

Full Specifications of Mi 10i 5G

The Mi 10i smartphone was launched on 04 January 2021 by the china based company, Xiaomi. It is one of the first phones to feature a 108-megapixel camera at an affordable price. The Qualcomm Snapdragon 750G SoC drives it.

This latest launched Mi 10i 5G is somewhat similar to Xiaomi’s Redmi Note 9 Pro 5G, which was released in China in November.

The Mi 10i has a lower starting price than a mid-range phone. The I stands for India, according to Xiaomi, because this model was created specifically for our industry.

It’s clear that Xiaomi wants to make a name for itself in the sub-Rs 25,000 range and the Mi 10i 5G will have to contend with some heavy hitters like the famous Mi A2. The camera’s specs alone are likely to draw the interest of buyers.

Let’s take a closer look at the whole kit. The Xiaomi Mi 10i is reviewed in detail here.

Apart from the fact that they’re all big, heavy phones, the latest Mi 10i bears little resemblance to the Mi 10 (Review) or Mi 10T series. The Mi 10i has a thickness of 9mm and weighs 214.5g.

The Xiaomi Mi 10i 5G has a punch-hole cut-out, a slim bottom bezel, and a fingerprint sensor on the side. The length of the phone is 165.4mm with the breath being 76.8mm. The Mi 10i’s panel is totally smooth, with no rounded edges.

The glossy but understated Atlantic Blue and Midnight Black will be available, as well as the much more eye-catching Pacific Sunrise, which has a matte finish and a color gradient that shifts from blue at the top to white to orange at the bottom.

There are three colors available in Mi 10i 5G.

Mi 10i comes with a 6.67-inch full-HD dot display HDR10+ LCD monitor. Xiaomi not offering AMOLED displays can be disappointing to some users. Colour reproduction is limited to 84% of the NTSC gamut and with a peak brightness of 450nits.

The adaptive refresh rate, which can scale between 30Hz and 120Hz in six stages, is a cool feature. There is TÜV Rheinland certification for blue light emission, and you can manually set the white balance as well as select your desired level of color saturation.

This smartphone has a screen resolution of 1080 x 2400 pixels and a 20:9 aspect ratio, providing a beautiful visual experience. It is protected by Corning Gorilla Glass v5. Furthermore, the device’s bezel-less display is aided by a punch-hole design that houses the front camera.

Rear Camera: Xiaomi packed a 108-megapixel main rear camera, with the Samsung HM2 sensor and f/1.75 aperture, is the star of the show, but there’s also an 8-megapixel f/2.2 ultra-wide camera, a 2-megapixel macro camera, and a 2-megapixel depth sensor.

it is the best camera phone under 25000 in my opinion. Its 108 MP camera captured very impressive photos.

Pictures from the main camera look like DSLR photos, capture all the details, color tone is natural, perfect sharpness, and high resolution made it camera king. also macro and depth sensors did a great job of capturing images.

Front Camera: By default, photos are taken at 16 megapixels, with the sensor merging nine pixels into one. Daytime shots with the primary front camera were good, but there was evidence of over-sharpening and detail seemed to be missing sometimes.

This phone has an octa-core Snapdragon 750G processor which is based on 8nm technology and support for next-generation 5G Network, this processor is relatively modern. also, it can handle all the heavy usage like high-end games, video editing, and multitasking.

This chip is newer than the Snapdragon 765G and provides some benefits in terms of higher efficiency. It has a CPU of 2×2.2 GHz Kryo 570 & 6×1.8 GHz Kryo 570. The integrated Adreno 619 GPU is powerful in terms of graphics. The Snapdragon X52 5G modem is built into both chips.

Xiaomi first introduced the Mi 10i 5G in India in January. The smartphone came pre-installed with the Android 10 operating system and the MIUI 12 user interface. MIUI 12 comes with a slew of useful features and customization options.

Xiaomi’s highly customizable, Despite promising a “clean MIUI 12 experience with Google apps,” Xiaomi piles on the bloatware and promotional material.

The latest Mi 10i 5G handset introduced with two variants in RAM which is 6GB and 8GB of RAM are the two options available to its user to choose from depending upon their uses and requirements.

Most users prefer Increased RAM as it allows enhanced applications and frameworks to be more flexible, allowing users to do more with ever-evolving user interfaces.RAM can handle all the heavy apps data for a long time because of better RAM management.

This smartphone has an internal storage of 128GB. The Handset has the option of two variants in RAM combined with the only option in internal storage. It has expandable memory which can be expanded up to 512GB and has a hybrid sim slot.

The MI 10i gives an excellent backup in terms of battery for the entire day. The phone has a 4820mAh battery. It is a Li-polymer non-removable battery.

The phone supports fast charging and comes up with a 33w fast charger. The phone can be 100% charged in 58mins when it’s completely dead. if you can charge it for only 5 minutes then it fills 15 percent of the battery.

Mi 10i has a 5G connectivity. Xiaomi launches it with 5G connectivity to make it a futuristic phone. also, it has a dual 4G VoLTE for suitable in India.

The phone is inbuilt with a notification LED, 3.5mm audio port, and dual stereo speakers, among other features. The bottom speaker and earpiece work in tandem to deliver high-quality stereo sound, which is awesome and gives an amazing sound experience.

The Mi 10i phone has gorilla glass 5 protection on both the front and backside. The phone gives a high-end appearance and feel. It has a panel that is completely round. Though the phone weighs a little heavy, which makes it difficult for one-handed use.

It has a side-mounted fingerprint sensor that is built where your hand naturally sits, with dual GPS to improve navigation accuracy in complex environments.

sensors help to make the phone more smart and secure which is why Xiaomi fitted all the necessary sensors in the Mi 10i 5G. also they attached a side-mounted fingerprint for better safety and security. all the sensors listed below.

Xiaomi Brand lovers always curious to know the cost of the latest smartphones, also for their better satisfaction they guess the price before launch because they want to buy it at any cost.

Xiaomi Mi 10i 5G listed on amazon at 21999 for the base variant and 23999 for the top variant. both variants are available on Amazon and offline shops.

Note: At the writing time, the price is still the same but in case the price high or low in the future that is not our fault. Also, the phone is available online at the same price which we mention.

but if you buy the smartphone from the offline market then the price may be high for any reason.

Full Verdict about Mi 10i 5G

The Xiaomi Mi 10i is a mid-range smartphone with a decent specifications sheet that includes a capable display, great performance, an outstanding camera setup, plenty of storage space, and a long battery life with 33W Fast Charging.

Users will also have access to the most recent version of MIUI 12 as well as a side-mounted fingerprint reader. But the disappointing thing is it has an old operating system which is Android 10(Q).

if they install the latest OS then it would be more perfect for buying. but don’t worry you can update it after purchase. Apart from this, Mi needs to improve its display quality and also its ads-free user interface. We consider it the best camera phone under 2500.

Furthermore, This phone will give you great value for money. It’s totally worth buying a deal.

Xiaomi launched the Mi 10i 5G on 04 January 2021 in India. The phone comes with great specifications, built quality, charger, and 5G connectivity. In addition, Xiaomi offers expandable storage up to 512 GB via memory card.

Yes, the Mi 10i comes with dual 5G connectivity but as we know that 5G is yet to roll out in India, the company made it a futuristic device for its users.
In addition, they provide other network connectivity which is dual 4g VoLTE. In India, you can enjoy 5G services till the end of the year.

No Doubt, Mi 10i the best smartphone for Indian users because at this price point they pack it with strong features like a strong 4820mAh battery, dual 5g, quad rear camera setup, gorilla glass protection 5 on both side, and strong build quality. also, they provide a 33W fast charger in the box of Mi 10i.

As Indian users, we want a strong battery, strongly built quality, impressive performance, good sound quality, and capable performance. All these things are packaged by Xiaomi in Mi 10i.
If you want to do high-end games and heavy multitasking well then the Mi 10i smartphones cater to all your needs. now we would say it is worth buying for you.

If we compare Mi 10i 5g with Poco x3 pro then we keep in mind before, both phones are designed by Xiaomi. First of all the price difference in both phones have three thousand. the Poco x3 pro price is 18999 and mi 10i price is 21999.

Mi 10i has an option like 5G connectivity while Poco is not there and if you talk about other features, then more features are good in Poco. In the Poco X3 pro, you get waterproof, a big battery size, and the latest Android version 11.