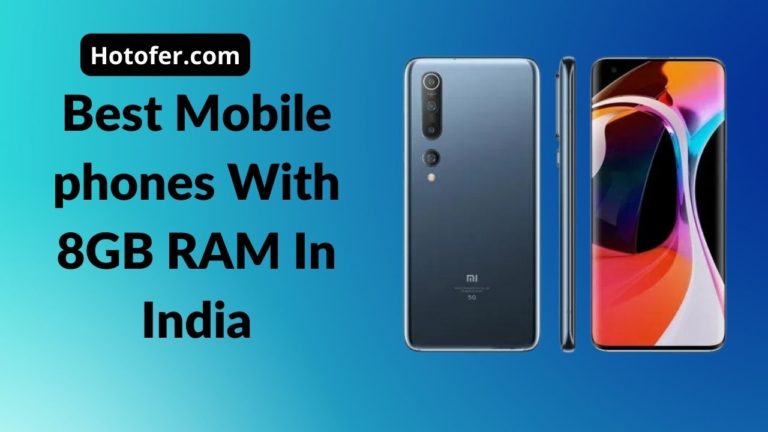 Hello Guys, if you want to buy a perfect 8GB RAM phone to play games smoothly and for multitasking then you are in the right place because here we share some of the best mobile phones with 8GB Ram in India which are specially designed for better performance.

There will be three color possibilities for the Realme GT Neo 3 in this country: Nitro Blue, Asphalt Black, and Sprint White. This phone has two storage options, 8GB or 12GB RAM and 128 or 256GB internal flash storage. This phone comes under 35000 rupees, at this price tag, Reame GT Neo 3 is one of the best phones with 8GB RAM.

An AMOLED panel with 120Hz refresh, 100% DCI-P3 color gamut coverage, and a 1000Hz touch sampling rate is displayed in the Realme GT Neo 3. the display type is good for media consumption and gaming.

MediaTek’s Dimensity 8100 powers the smartphone, which is 8GB RAM Mobile Realme and goes up to 12GB of LPDDR5 RAM and up to 256GB of UFS 3.1 storage. Realme has launched this powerful smartphone especially to target gamers, it is one of the best gaming phones under 50000 rupees.

Three cameras are mounted on the back of the phone: the primary 50MP Sony IMX766 sensor with Optical Image Stabilization (OIS) and an 8MP ultra-wide-angle, and a 2MP macro lens. A 16MP Samsung S5K3P9 sensor takes care of the selfies.

The phone sports a 32MP selfie camera with autofocus with a punch-hole-shaped display cutout. With three cameras on the back, it has 12MP wide-angle, 12MP ultra-wide, and 8MP telephoto. Dual-pixel autofocus and OIS, an F/1.8 aperture, and 1.8m pixels are all rumored features of the 12MP wide-angle camera.

Also, it has a 32 MP front camera to capture photos and videos. the ultrawide camera on the Galaxy S20 Fan Edition can record 4K footage at 60 frames per second. It comes under 8GB RAM Mobile Samsung and goes up to 12GB with 128 GB internal storage.

This premium smartphone has a Super AMOLED display with a 120 Hz refresh rate for increasing the viewing experience, the quality display type of Galaxy S20 FE impresses users.

Qualcomm Snapdragon 865 chipset powers the 5G version, while Exynos 990 powers the 4G LTE version. An under-display fingerprint reader and dual speakers round out the list of features. All these features make it one of the best Samsung phones From 10000 To 70000 Rupees in 2022.

The 8GB or 12GB of RAM and 128GB or 256GB of internal storage options are available in the Vivo V23 smartphone. This Vivo 8GB RAM phone is now available for purchase online and offline stores.

The 6.44-inch AMOLED display of the Vivo V23 5G has Full HD+ resolution. HDR 10 support, a 90Hz refresh rate, and a larger notch that can include a dual front-facing camera and a dual-tone flashlight are all included in the display panel.

The Mediatek Dimensity 920 processor powers the gadget. A Mali G68 graphics processing unit handles handset graphics. The phone has a minimum of 8GB RAM and a maximum of 12GB of RAM. Virtual RAM is also 4GB on the device.

Vivo V23 has a 4200 mAh battery capacity that offers a full day of battery backup in light usage, and this phone supports 44W fast charging.

The next phone on the list of the best mobile phones with 8GB Ram is Redmi Note 11 Pro Plus 5g. It is a 6GB and an 8GB RAM Mobile, that is available on the market in two different variants.

The 6.67-inch AMOLED screen on the Note 11 Pro Plus 5G has a resolution of Full HD+ with a pixel density of 395ppi. A 120Hz refresh rate display supports 360Hz touch sampling. It has an Aspect Ratio of 20:9 and a peak brightness of 1,200 nits. There is a centered punch-hole for the front-facing camera on the display panel, protected by Corning Gorilla Glass 5.

The Note 11 Pro+ is powered by a Qualcomm Snapdragon 695 octa-core processor fabricated using TSMC’s 6nm manufacturing technology. Adreno 619, LPDDR4x RAM, and UFS 2.2 storage are all included in the system on a chip. The phone comes pre-installed with MIUI 13, the company’s custom Android 11 skin, and is one of the Best 8GB RAM Mobile at the lowest price.

The OnePlus Nord CE 2 will have a 6.43-inch Full HD+ LCD display with a refresh rate of 120Hz. This is a budget Oneplus Phone with 8 GB RAM and 128GB of storage that will be supported by the MediaTek Dimensity 900, this chipset is capable of gaming and heavy multitasking.

A fingerprint sensor will be placed on the phone’s side in place of the conventional Alert slider. The phone has a 4500 battery that gives 36 hours of battery backup and it supports 65 W fast charging with SUPERVOOC technology.

It’s safe to assume that the camera setup will have a main 64MP primary camera, a 2MP depth sensor, and a 2MP macro sensor on the back of the phone. Selfies will be taken care of by a 16MP camera on the front. Out of the box, it will run OxygenOS 12.1 which is based on the latest Android 12 operating system.

The Snapdragon 870 chipset powers the Neo 6. It’s possible to play games like Call of Duty Mobile and BGMI with 60 frames per second. A future OTA update will enable the 90 fps mode, which will be available through a partnership with BGMI. It is packed with an AMOLED display that has a 120 Hz refresh rate.

Oneplus also uses large cooling vapor chambers to keep its thermals under control. With up to 256GB of storage, the smartphone has up to 12GB of RAM, and it is the Best 8GB RAM Mobile at the lowest price.

Camera-wise, it’s a downgrade from the iQOO 7 released in 2021. To put it another way, the 64-megapixel main camera on this model of the iQOO comes from Samsung rather than Sony. OIS is also available for the primary camera, ensuring sharp photos and movies.

A Full HD+ AMOLED display on the Oppo F21 Pro has 409ppi pixel density and 600nits peak brightness. The display screen can accommodate a touch sampling rate of up to 180Hz and refresh rate of 90 Hz, It is one of the best 8GB RAM Mobile Oppo which comes under 25000 in India.

The integrated 8GB LPDDR4X RAM, and 128GB UFS 2.2 storage are all included in the system. This phone runs on ColorOS 12.1 which is based on Android 12.1 that is pre-installed on the device.

The display and camera setup are the key and highlighted features of this phone that make it one of the best phones under 30000.

Motorola did a great job in the budget range segment in the past few days, they launched power-packed smartphones with the lowest cost, Motorola Edge 20 Fusion being one of them, which has really amazing features like a triple rear camera setup, along with an OLED display type that has 90 Hz refresh rate.

Apart from good cameras and display, this is a performance-centric phone as it is powered by a MediaTek Dimensity 800U processor, gaming and multitasking could be more smooth on this phone. The phone has a 5000 mAh battery capacity which gives a battery backup of 36 hours during normal usage and can be recharged from 0 to 100% in just 50 minutes as it comes with a 30 W fast charger.

So, These are the best mobile phones with 8GB Ram that you can buy in 2022, all these smartphones are available for buying on Amazon and Flipkart. We personally like Realme GT Neo 3 because this phone has really amazing features such as MediaTek Dimensity 8100 processor for better gaming and multitasking, an amazing display for media consumption, strong battery backup, and two RAM variants.

There are lots of phones available in 2022 which have 8GB ram under 30000 price, here we will share the top 5 phones with 8Gb ram.