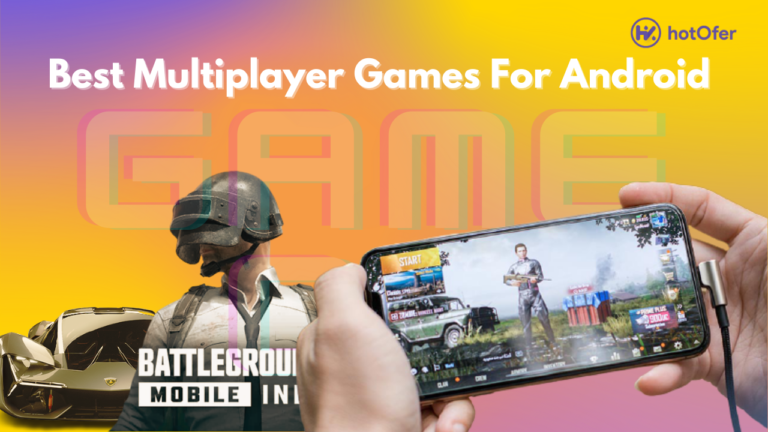 Hello Friends, if you are getting bored at home and want some entertainment in your life, then you must try some multiplayer games, because if you play games with your friends and online, then you feel self-entertaining. That is why, Here, we will share some of the best multiplayer games for android that you can play online or play with friends. Also, we share the highlighted features and playing experience for better understanding.

In today’s world, it has become very rare to find a house where no one plays online multiplayer android games. Many people specially make time from their busy schedules just to play these multiplayer online games. These games have no age restrictions. We can see all age types playing android games nowadays.

Many Indian gaming companies have taken the initiative to promote these mobile multiplayer games so that we Indians can also play games that are made in our country. There are many young engineers, developers, designers taking part in this industry actively. Many startup companies are also engaged in this field of multiplayer games for android.

The game name itself is also Battlegrounds Mobile India. You get various amazing rewards on playing Battleground Mobile India. This game is classified as a Battle Royale. Also, the platform used is Android as most the users in India have android phones. It is one of the most popular Online multiplayer games android. Also, BGMI is one of the Best games for Android. Now, Battelgrounds Mobile India available for android and ios users.

BGMI has proved itself as a great platform for the best multiplayer android games. The game developers have tried their best to keep users away from any wrong mindset that can be created during the game. In BGMI, the players win amongst their opponents by killing them.

Free Fire is the best multiplayer game in India. This game is initiatively known as Garena free fire, also now known as Free Fire. This game is a battle royale game. For Android and iOS users, the game is created by 111 Dots Studio and released by Garena.

This game is very much in demand since the year 2019. The free fire game has become the most downloaded game for mobile users all around the world.

It is one of the most loved games and top rated multiplayer game. It has developed a sense of concentrating better, being able to communicate better, be freer to categorize things, and also being a better strategist. It also practices your reflex actions.

Fortnite is an online multiplayer video game that was developed by Epic Games and the amazing game was released in the year 2017. The game is designed by Darren Sugg. Fortnite is a free-to-play Battle Royale game with a variety of game modes to appeal to all types of gamers.

Ludo King is an Indian multiplayer mobile game and It is developed by Indian studio Gammation Technologies. This game is Mumbai-based. The amazing game was released on 20 February 2016. The ludo king games are multiplayer video games.

Also, It can be played on platforms like Android, Microsoft windows, iOS, etc.

This game has a very huge download from all over the world as it has various features loved by the citizens and also the game has no age limit, people of any age can easily play the virtual game and take immersive experience on online playing.

This amazing game is on the worlds fearless and has become an asphalt legend in the best arcade racing game on iPhone, iPad, as well as Android. Asphalt 9: Legend is a fantastic 3D driving game in which you race around the world in fast vehicles on routes that take you all over the globe.

The Asphalt was released on 26 February 2018. there are single-player and online multiplayer modes in this game.

This is one of the Best multiplayer games for android users. The game is loved by all the users all over the world and attracted the attention of people by its amazing features and effects which are becoming more updated and advanced day by day.

Call of duty is an online multiplayer shooting game. It is playable in the third person as well as the first-person view. We get a kind of open world to roam around. You can play either the online multiplayer Deathmatch or the Battle Royale.

Highlight Features of Call Of Duty

Playing experience in Call Of Duty

The deathmatch has a small fight between 2 teams with a group of 4 players each. Whereas, battle royale is a mode that enables the player to survive between 100 players playing on the same map.

Chess is played all over the world with a great amount of interest. It helps the player to increase his or her concentration level. Chess has always been considered to be a game that requires a high level of patience.

Now you can play chess anywhere and anytime, just by using your phone. The online android game of chess provides the user with a strong opponent that is the computer.

Chess: Play and learn helps the user to improve his or her playing skills and observation skills. Also, the player can make progress in his concentration level as chess needs a lot of patience, analysis, and understanding of the opponents.

Solitaire is a game that is played in every part of the world. This is a simple but fun game that perfectly goes along with any type of age group. In this game, you have to arrange the cards according to their symbol and in numerical order. You win only when you can arrange all the four-cardstocks completely.

It is easy to play. The main challenging part of the game is that the player needs to be highly patient. It is fun to play this game anytime. When you start playing, you go on playing for a long time.

Eight Ball Pool is a multiplayer online game for android. It is played with fifteen object balls numbered 1 through 15, and a billiard ball. One player has 9 thru 15 (stripes), while the opposite player must pocket balls of the group numbered 1 through 7 (solid colors).

It is the best multiplayer game for android. The player pocketing his group first and next pocketing the 8-ball wins the sport.

8 Ball Pool is the best online multiplayer game for android. It has different games, like 9ball, calling all shots or only the black, or none, 8 ball pool, tournaments, and with only 50 pool coins games you can practice forever. Even offline practice, and no guide games.

Modern Combat 5 is the next installment in Gameloft’s successful first-person shooter genre, and it is a single-player and multiplayer online game for Android and iOS.

The multiplayer game includes all amateur FPS modes of game including squad combat, capture the flag, and free for all, kill the designated player and group fight.

All in all, amazing game! It is the best mobile multiplayer game. Great narrative, multiplayer, and single-player modes! Hud customization allows you to make buttons more comfortable, and sensitivity settings allow you to make camera movements more pleasant.

Mini Militia is one of the best multiplayer android games. It is a fun and simple game. Now you can add your friends and play together. The latest version of Mini Militia- Doodle Army 2 should be installed in every friend.

This is one every of the simplest mobile multiplayer game. The graphics are good and the controls also are very nice. Many many avatars, custom modes are available.

This game can be played with your buddies as well. You can even hunt for other players by their ID. Overall this game is incredibly nice to play.

Badminton Blitz is a 2D multiplayer online game for Android where you get to play in opposition of the other players in exciting one-on-one duels. after you start playing, you will be able to choose from three different kinds of players: defensive, offensive, or balanced. The controls of the games are quite simple for a mobile multiplayer game.

Badminton Blitz is an outstanding badminton game that offers a gameplay that’s fun as well as highly competitive, along with amazing graphics.

The game also has an impressive number of skins that you can use while playing. It is one of the most amazing online multiplayer games for android.

The progress of the Indian Gaming industry is very remarkable. In the last few years, India has continuously been providing Indians with the best online multiplayer games for android.

These Best mobile multiplayer games have been helping people to enjoy their leisure time with their friends. Now, you can choose any game from the list and play as per your wish.

Which are best multiplayer games for Android?

What mobile games are multiplayer?

There are many games which played by multiple players, such as Free Fire, BGMI, and ludo king. These are multiplayer games because everyone can play these games with friends and online.

What games can I play with friends online for free?

You can play multiplayer games with your friends because they offer that platform where everyone plays with many other players. You can enjoy the gameplay as long as possible without interruption.

Which is the most famous multiplayer game in India?

BGMI and ludo king are the most popular multiplayer games in India.