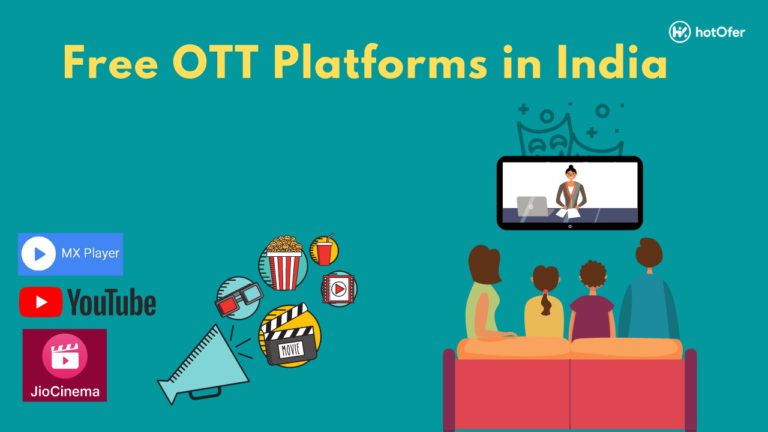 Hello Friends, If you want to watch movies and web series for free on mobile, you are at the right place because here we will share some Free OTT Platforms in India that provide web series and the latest movies for free.

In the pandemic, most of the people use the OTT platform to watch the latest movies and web series as the cinema hall is closed. Now, many movies are released on OTT apps like Amazon Prime, Netflix and Disney+ Hotstar.

Online streaming of movies and web series is in trend these days; Everyone wants to stream content on their mobile, but most of the OTT Apps are paid. Now the problem is that they do not have money to subscribe to these apps. To solve this problem, we will share some of the best free OTT apps in India.

Here, we will review four Free OTT apps below; You will read the article until the end and enjoy the features we will disclose in the article.

Let’s start with the article.

MX Player comes in one of the best Indian apps for entertainment and an app for free web series. Users can Find this web series app free, and it is created by J2 interactive. Mx-player started on 18 July 2011 as a video player.

After some years, this app launched its new feature, and it was the OTT platform. In starting, Mx player provide Bollywood and Hollywood movies for free. This Indian movies app has an exclusive collection of Movies, Web-series, Tv-shows, Latest Songs, Music videos, and many more. In Mx Player, you get content in eight different languages, which is suitable for everyone.

Users can see the shows anytime from anywhere using these types of Indian entertainment apps. This app also covers free content for its viewers. This web series app is free to use, and users can download this app from the Google Play Store or Apple Apps store. Mx player is the top app in India.

This web series app is also providing premium membership which includes some exclusive features for their viewers. But Users can Find all web series and movies for free. Mx-player is one of the best free Ott platforms in India.

Pros and Cons of MX Player

Many company provide free ott platforms in India. Jio Cinema comes in one of the Best Indian apps for entertainment and app for free web series and movies. The founder of this Hindi movie app is Mukesh Ambani, and it is owned by Jio communications.

Jio Cinema app specially designed for Movies, Tv-Shows, and Music. This Hindi movie app launched on 5 September 2016. All Users can find most of the movies and watch them without any paid version.

According to statistics, this Hindi movie app has a 7% market viewership. This Free OTT app has some most popular webseries and movies; the users can download this app easily from Google play store and Apple apps store.

Users can see the show anytime from anywhere using this Indian entertainment app. Jio cinema app supports eight different languages. Jio Cinema mostly puts Bollywood movies into its app; that is why we can also say that this is the Best app for Bollywood movies and web series.

Pros and Cons of Jio Cinema

Airtel Xstream comes in one of the Best Indian apps for entertainment, and It is a free OTT platforms in India, which used to see unlimited movies on the T.V. This Indian web series App launched on 7 September 2020. User can Find this web series app free.

Users also have access to live news, tv shows, and all the T.V channels. Airtel Xstream is the app for free web series. Users can see the show anytime from anywhere using these type of Indian entertainment apps. Airtel Xstream has a massive collection of Bollywood, Tamil, Telgu and Hollywood movies.

Airtel Xstream is also famous for Bollywood movies and shows. It is an Indian web series app that comes in 9 different languages. Users can watch movies with 4k picture quality at the minimum price. This web series App comes with the Kids category, Movies category, News category and Many more.

Pros and Cons of Airtel Xstream

Use with Airtel and Non-Airtel Network
Access to over 10,000+ Movies
Watch Live TV
It has chrome Cast feature

Youtube provides free OTT platforms in India. YouTube comes in one of the Best Indian apps for entertainment. It is known for its free Entertainment Content and it was founded by three persons: Jawed Karim, Steve Chen, and Chad Hurley. Youtube was launched on 14 February 2005 in San Mateo.

In Youtube, users can create their Youtube channel and upload videos, movies, Web series, Album songs, Vlogs, Short videos, and many more. Youtube is the famous platform to watch Bollywood and Hollywood movies.

Here, users can watch and download the latest Indian web series for free, and also, you can rent or buy premium movies or web series.

We hope you will like the review of the best free ott platform in India. You can use each App to watch movies and shows for free. In these apps, you will get most of the movies and web series easily. If you have any queries related to free Ott Platforms, then comment below the article; we will reply as soon as possible.

Heartfelt Thanks for Reading!

Which OTT apps are free in India?

List of the best Free OTT Apps in India

Which are the best OTT platforms in India?

How can I watch web series for free?

There are few OTT Apps that provide free assess to stream content. You can use these apps to watch the latest web series and movies for free. In India, MX Player and youtube provide free content. In these apps, you can get most of the webseries for free.